Have you ever seen the Disney movie, Monsters, Inc.?  Can you place the scene in which this image appears? 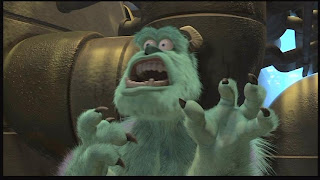 This is the scene where the monster "Randall" is choking / fighting Sulley. Randall is invisible, and Sulley is waving his arms around desperately trying to get Randall off of him & get rid of his invisible attacker.

Multiple sclerosis is a hell of a lot like Randall in this scene. We can't see it - we never know when it is going to attack, or what part of our body will be caught in its evil grasp. Other 'invisible' illnesses are like that too - you just never know.

If you recall - also in this scene of the movie, Mike comes in and is talking with Sulley - and Mike can't see that Sulley is being attacked. It takes a bad throw of the snow-cone ball to make Randall visible to Mike & eventually help Sulley overcome his attacker.

I write all this to say that you never know what someone else is dealing with - what just being where they are at that very moment might be costing them. If you know that someone is living with a disease/illness that you can't see - do all that you can to be a little more patient. Understand that sometimes, they just want someone there to hold their hand in silent support... and maybe throw a snowcone at them every now and then. :)

Snow cone anyone? I swear - its lemon! 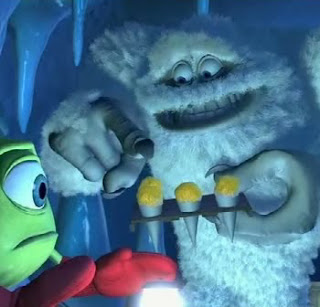